Halloween has always been a night filled with mystery, magic and superstition. It began as a Celtic end-of-summer festival during which people felt close to dead relatives and friends and over the years transformed into a night of celebrations inclusive of bloodcurdling costumes, pranks, scary stories and watching horror movies.

The dark History of Halloween 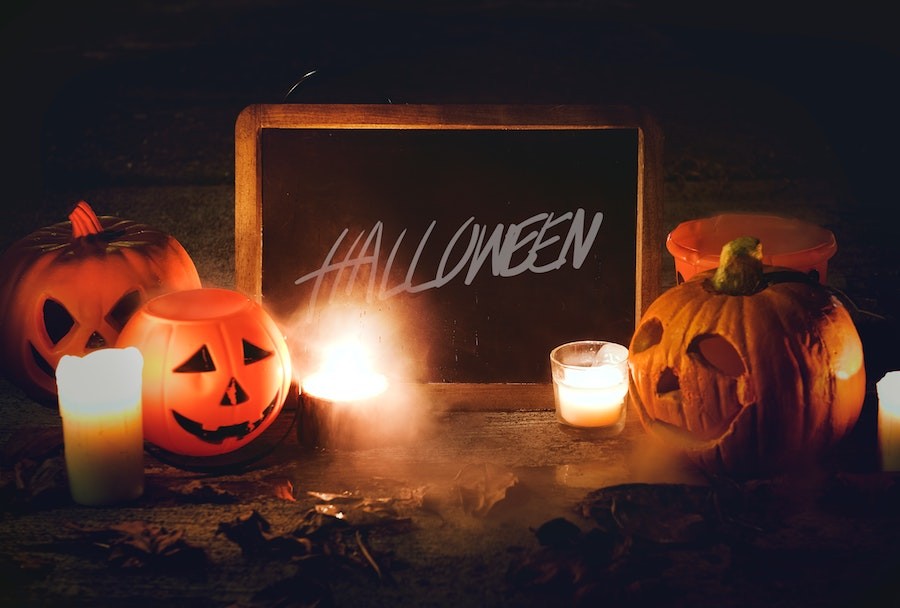 Halloween is the spookiest night of the year. People around the world celebrate it with scary costumes, pumpkin curving, trick-or-treating and eating sweet treats.  But the origin of Halloween goes back centuries and draws from both Celtic and Christian traditions.

According to the Oxford English Dictionary, Halloween is a shorter version of All-Hallow-Eve – the eve of All Hallows’ or All Saints’; the last night of October. ‘In the Old Celtic calendar the year began on 1st November, so that the last evening of October was ‘old-year’s night’, the night of all the witches, which the Church transformed into the Eve of All Saints.’

The tradition of Halloween originated from the ancient Celtic harvest festival, Samhain.

Samhain was a pagan festival where people lit bonfires to burn crops and animals as sacrifices and dressed up to defend against ghosts believed to have returned to earth on that one night of the year. During the celebration the Celts wore costumes, which typically consisted of animal heads or skins, and would try and tell each other’s fortunes.

When the Roman Empire conquered the Celtic lands, Samhain was combines with two Roman traditions: Feralia – the passing of the dead – and Pomona – the Roman goddess of fruit and trees. Interestingly, the symbol of Pomona was an apple which could explain the tradition of apple bobbing at Halloween.

By the 9th century the influence of Christianity had spread into the Celtic lands. In the 10th century, November the 1st became an All Saints Day and the day before became known as All Hallows Eve, and later Halloween. All Souls Day, also known as All-hallows or All-hallowmas, was celebrated similarly to Samhain, with big bonfires, parades, and dressing up in costumes representing saints, angels and devils.

Mischief Night is the night before Halloween (31st of October). It is often celebrated with an evening of hi-jinks, practical jokes and family outings and goes by many names, including Goosey Night, Cabbage Night, Gate Night, and Devil’s Night. How many synonyms of mischief would you be able to list?

To give you a helping hand, we selected a few you can use:

What are alternative words for ‘scary’?

The most common synonyms of ‘scary’ are frightening, terrifying, petrifying, hair raising and horrifying. But there are also some less common words to replace what we would say is the most popular Halloween word.

Buggish has a few meanings, one of which is ‘causing or intended to cause fear or dread’. This word comes from an early use of the word bug, defined as ‘an imaginary evil spirit or creature; a bogeyman.

Ferly can be used in two ways, as something unusual, strange, or causing terror, as well as something astonishing and wonderful.

Nowadays epouventable means appalling or dreadful but an early written use of this adjective comes from a translation of The history of Jason by Raoul Le Fevre, printed by William Caxton in 1477, and refers to a ‘grete espouentable dragon’.

Ghastful comes from the verb gast, meaning to cause fright. It is also defined as dreadful, terrible, or alarming.

It is time to get some boggish looking sweets, get dressed up in your epouventable Halloween costume, and be ready for the first knock at your door – “TRICK OR TREAT!?!”