Learning a language is a New Year’s resolution for about one in five Britons (21%) in 2018, according to a poll commissioned by the British Council.

Amongst the 2,000 UK adults surveyed, one in five said they plan to make learning another language their New Year’s resolution. One in three intends to try and learn at least some phrases in another language in the year ahead.

The languages Brits are keen to learn include Spanish – the language identified to be the most vital in post-Brexit Britain, followed by French, Italian, German and Japanese.

The survey concludes that:

Current language skills amongst 18–34 year olds in the UK: 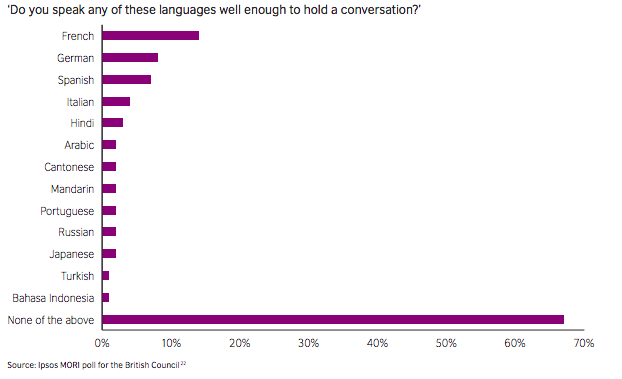 The UK’s current lack of foreign language skills is said to be holding back the country’s international trade performance, at a cost of almost £50 billion a year. The British Council is urging more of us to think about the importance of other languages and to take one up in 2018.

There are lots of language online apps, podcasts, courses and games available to help people try a new language, or dust off their previous language knowledge. These can be used independently or alongside traditional classes. In a recent article, Tech Radar identified the best language apps, many free of charge, including Duolingo, Memrise, Tandem, Rosetta Stone, FlashAcademy, TripLingo, Udemy Language Courses, Babbel and more – see the full list here. You can pick and choose the app that best suits your learning style and that you will find most fun to learn from.

Languages for the Future

In its recent report, the British Council highlighted the shortage of people able to speak the ten most commercially important foreign languages. These languages are vital for post-Brexit Britain and the country’s future prosperity.

The Languages for the Future report identifies Spanish, Arabic, French, Mandarin Chinese, German, Portuguese, Italian, Russian, Turkish and Japanese as the languages most valuable to the UK over the next 20 years.

They were chosen based on economic, geopolitical, cultural and educational factors including the needs of UK businesses, the UK’s overseas trade targets, diplomatic and security priorities, and prevalence on the internet.

Other languages which scored highly and may well grow in importance in the future include Polish, Malay and Hindi, along with other Indian languages. 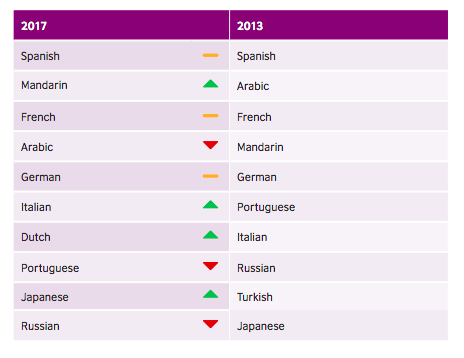 Knowing a foreign language can be a very valuable asset to your career.

“As firms look to markets around the world, languages are becoming increasingly valuable. Employers are showing a growing interest in those skills.”

Five years ago; Labour Market Intelligence’s research on languages and careers, based on job advertisements from a selective number of websites, put German in first place as the most highly valued career enhancing second language, followed by French, Spanish, Italian, Dutch, Russian, Swedish, Portuguese, Danish and Norwegian, with Chinese (Mandarin and Cantonese being treated as one) trailing in 11th place. Comparison of these two sets of findings suggests that, in recent years, demand for Mandarin Chinese, Arabic and Japanese has overtaken the demand for Russian, Portuguese and Scandinavian languages.

Percentage of companies rating a specific language as useful to their organisation: 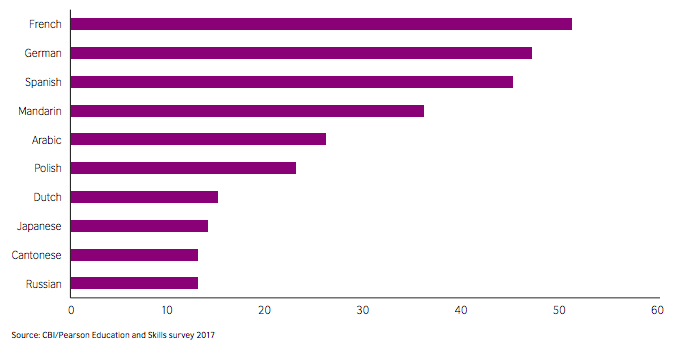 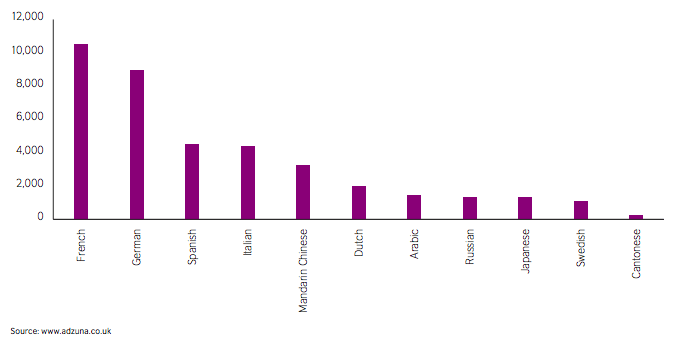 Languages in the International Trade Market

In 2017, the Department for International Trade launched a strategy which named 45 overseas markets for UK business development, post-Brexit.

Adding to this list are the emerging markets, in order of expected growth to 2020, including India, Vietnam, Ghana, Malaysia and Poland to mention a few. 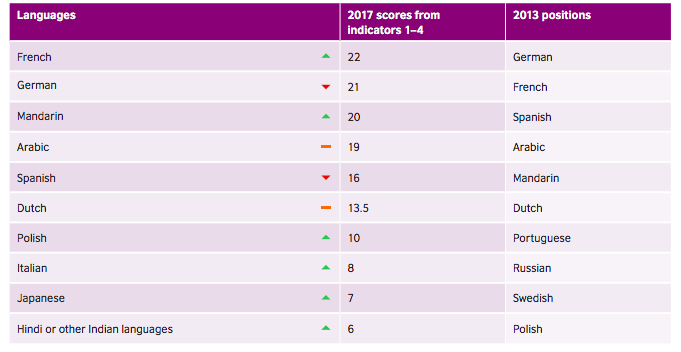 Where the level of English language proficiency in a country is low, the ability to communicate in their language is of the utmost importance to future business. To enable Britain to trade with these countries, highly skilled workers, speaking international languages are required and essential to the future growth of the British economy. 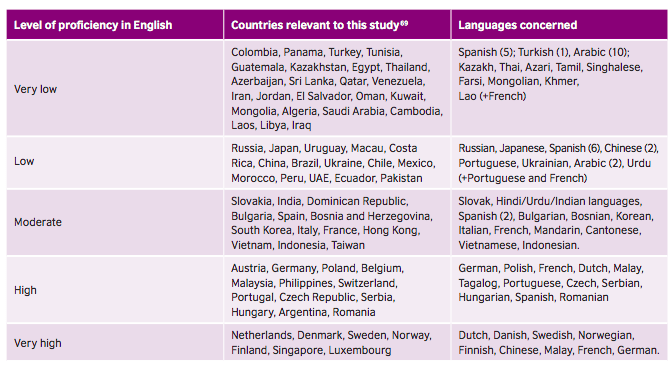 Moreover, businesses trading online need to consider the different languages on the internet to target a wider audience. In 2017, Chinese was the second internet language after English. Compared to figures used in 2013, from the same source, Korean has dropped down to be replaced by Malay, but all other languages referenced remain in the top ten. Japanese, German and French have moved down the table, whereas Arabic and Russian have moved up.

It’s about time we moved on from the mantra that English is ‘the’ international language of business, to understanding more about the importance of other languages and the many varied circumstances in which they are used in addition to, or in preference to, English.

The full report can be accessed here: